UPDATE. January, 2022. Y-DNA testing indicates Richard Sainsbury of north Somerset was born in Urchfont, Wiltshire in 1708. Any speculation in this post that suggests otherwise is therefore obsolete. It remains online as a record of this research project.

A branch of Sainsburys who lived in the Chippenham and Corsham area of Wiltshire can be traced back to a Bartholomew Sainsbury who was born around 1620, location unknown, and who died in Corsham in 1680: 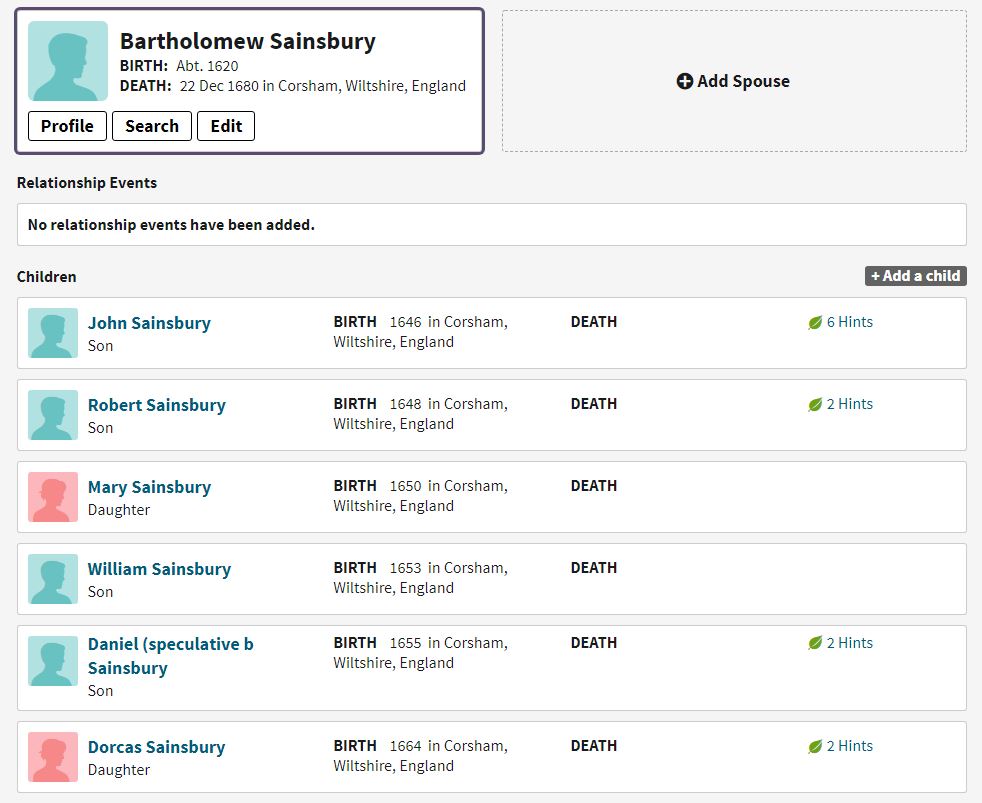 Fast forward more than a century and one of Bartholomew’s 3rd-great grandsons, James Sainsbury (bap. 1777 Melksham, Wilts.) and his wife Hester Andrews had (among other children) two sons (James, b. 1819 and George, b. 1822) in Dursley, Gloucestershire who each have a descendant with a DNA match to a Somerset Sainsbury cousin.

The multiple matches described in a previous post about the Castle Combe Sainsburys seem more significant than this “two descendants, two cousins” match to the Chippenham Sainsburys (and this particular branch, who lived in Melksham).

Nonetheless, these matches do go back to a single 18th-century Sainsbury couple and could be significant in our search for distant Sainsbury cousins if other matches to this branch are found.

It also provided an opportunity to discover an odd provision in the will of John’s father, Bartholomew Sainsbury (1733-1791), who named his youngest daughter, Margaret, as the executor of his will.

Margaret was either years old, so Bartholomew’s choice required two guardians to be appointed as executors:

Know all men by these presents that I Margaret Sainsbury lawful Daughter of Bartholomew Sainsbury late of Melksham in the County of Wilts and Archdeaconry of Sarum [Salisbury] deceased And sole Executrix named in his last Will and Testament being a minor under the Age of Twenty one years / to wit of the age of Eight years / and by reason thereof incapable by Law of taking upon me the Burthen of the Execution of the said Will Have nominated elected chosen and appointed and by these presents do nominate elect chose and appoint William Miles Yeoman and Stephen Bourne Vintner [?] — respectively of Melksham aforesaid by Guardians and Curators at Law for the purpose of taking Administration of the Goods Chattles and Credits of my said late Father together with his said last will and Testament annexed and for all other purposes whatsoever during my minority. . . .

The 10 Most Recent Posts